Episerver has given developers the ability to access its content through it's Content Delivery API. This allows you to use Episerver as a Headless CMS, accessing all of your content as JSON via a REST API.

This has been a game changer for Episerver. Not only do you get the benefits of a traditional CMS, but the ability to leverage headless capabilities means you can push your Episerver content out to multiple channels, including SPAs. If you have done any research into the Content Delivery API, you might have come across the Music Festival App built in VueJS.

Some notable features about this application are that it's a single page application (SPA), but it also allows for on page editing.

We had a need to take this even a step further. We needed to store content for multiple SPAs within the same Episerver instance, where the SPAs themselves would be hosted in a different location. While the Episerver instance also maintains an existing site. We'll get into a bit more detail about the project next.

Because some of the content editors would need to work in both CMS, they came to us for recommendations. They knew they wanted to explore a headless option, however they didn't want to lose out on some of their favorite Episerver features like on page editing or personalization. With the requirement that we provide a headless option, and the knowledge that the editors love Episerver's features, it took us all of two seconds to come up with Episerver's Content Delivery API as a solution.

On the surface, the solution was straight forward. We already demonstrated that Episerver's features could be leveraged in a headless context with the Music Festival example we mentioned above. It has personalization, on page editing, and was built out as a SPA. There are however a few differences that make this implementation different. Unlike the Music Festival example, these SPAs would not be the main site this Episerver instance is running. Second, the actual markups for these SPAs is hosted outside of Episerver. This will present some challenges around on page editing that we will discuss in more detail below.

One of those differences mentioned is that the portal applications were not the main site that Episerver is powering. Episerver has multi site capability, so that was one potential route. We decided to go for an even simpler approach, creating Containers in the Episerver page tree. Each container was assigned to a SPA. This allowed us to organize all the SPAs that would be potentially added, as well as easily control other aspects, such as permissions. It also allowed for a simplified approach when querying content from Episerver. Once a container is defined, its Id is set. With multiple development teams building out multiple portals, we can define how they all should be pulling content by putting it in the context of that container. An example being, "get all pages of type 'y', under container with id='z'".

We also created custom page types that would be used for the Angular applications. Custom page types not only made for easier querying for the other developers, since all the queries could just include a parameter that specified the page type, but it also assisted in on page editing.

In the razor views of our custom page types, we subscribed to specific Episerver events. One of which listened for updates to the associated properties as they were modified during on page editing. We also subscribed to a page load as well as an empty div tag that we used as reference to know where to load the associated page of the angular app.

The third, and more challenging difference between our application and the music festival app was on page editing. Remember that one of the requirements was that the portal applications would be hosted as separate apps in Amazon AWS? The Episerver instance is hosted with Episerver DxP in Microsoft Azure. Because Episerver cannot load an external site to render its editing interface, we would need to figure out a way to render the Angular App within Episerver.

While almost every aspect of the organization was separate, one thing they did share was source control. They belonged to the same organization in Github. To incorporate the angular apps into our Episerver code base, we created git submodules.

Submodules are a cool feature in git that allow you to reference another project from within an existing one. You can continued to treat them both as separate projects. Any changes to one require their own separate commits and pushes separate from the other.

In this scenario, we were given read access to the Angular project repository, and setup the submodule in the Episerver repository. For our Episerver site's front end, we have a separate build process using node.

As part of that build process, we added a step to get the latest from the submodule that contains the Angular app, and build it.

This allowed us to have the latest version of the app available for on page editing, without any additional effort on our end. 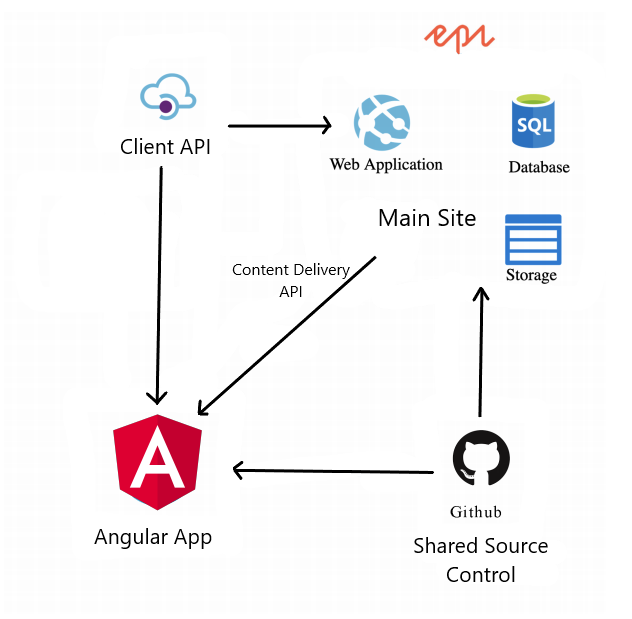 From there, the developers working on the Angular app only had to make sure they include episerver editor html attributes. When you load the on page editor in Episerver, it knows what areas to wrap in the green box which can be clicked on and edited, by looking at attributes within the markup. So if there is h1 header on the page whose content is being pulled from Episerver, you only need to add a few html attributes to the h1 that specify that is represents an Episerver property, and which property it is, and you will have on page editing.

The Angular app itself was pretty standard. As we mentioned before we needed to add attributes around elements to ensure they were picked up in Episerver for on page editing.

One other aspect we had to consider was routing. To enable us to load the appropriate page in the SPA when it on page editing, we had to add custom routes to map to Episerver pages in the CMS. If you ever looked closely at the URL when on page editing, you will notice its uniform across pages, with the exception that it updates an id at the end. This is the ContentLink id of the page.

While everything we covered checks all the boxes of our requirements, there are definitely some limitations to our implementation.

The main one being maintaining consistency between environments. While we were able to grab the latest version of the Angular apps through the submodules, it would only update for the editor when we also deployed the code for the Episerver site. Because of this, we had to coordinate when properties needed to be added or modified to maintain consistency between the portal and editor experience.

If any styling or layout changes were made, the understanding was that the editor experience might not match the app exactly until the next deploy, but would still allow editor so to modify content.

While this implementation might not be a common use case, I think it provides a great example of the range Episerver has as a platform. Not only was it able to continue functioning as the main site for our client, but it was able to leverage it's Content Delivery API to provide more channels for content.

If you have any questions about Episerver's Content Delivery API, or any of our other implementations, feel free to reach out to us.

David Boland 2022. Disclaimer: The opinions expressed herein are my own personal opinions and do not represent my employer’s view in any way. All the code on this site is available under the following open source license